An Occult and Alchemical Library

When acquiring early manuscripts these days libraries mostly get them one at a time. A 15th century medical compendium here, a cache of Mexican inquisition proceedings there. It was with excitement then that my colleagues and I read the catalog for the sale of some of the 12th Duke of Northumberland’s collection this past July. Amongst the treasures was a somewhat unassuming lot consisting of nearly 60 manuscript volumes from a single 18th century collector. These manuscripts had been left to the 2nd Duke of Northumberland by his friend Charles Rainsford (1728-1809).

Since 1809 they had sat on the shelves at Alnwick Castle, seeing only sporadic use. Rainsford was not only a British general and sometime governor of Gibraltar but an avid alchemist and occultist, fascinated by everything from the philosopher’s stone to Tarot to Rosicrucianism. The manuscript library he left to the Duke of Northumberland contained works he had collected in Gibraltar and on the continent but also a number copied out in his own hand from texts he had seen or borrowed. As Penn has long been a major collector in the history of science, especially that of chemistry and alchemy, my colleagues and I thought the opportunity to acquire an entire manuscript library was too good to pass up. Thanks to the generous support of the B.H. Breslauer foundation as well as several endowments here at Penn we were able to be the winning bidder when the collection was sold at Sotheby’s. 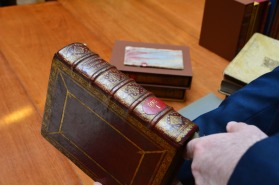 Many people think of alchemy and occultism as having their heyday in the medieval period but there has been a recent flurry of scholarship on the importance of speculative science and the occult during the 18th-century European enlightenment. Rosicrucians, hermeticists, and alchemists were part of the social and intellectual circles of most of the great enlightenment scientists – thriving in a world where new knowledge, ideas, and speculation were welcome. Rainsford himself was a friend of the great English naturalist Joseph Banks and while looking at the collection before the sale in London I was pleasantly surprised to have this note fall out of one of Rainsford’s volumes:

The Rainsford collection physically arrived here at Penn in the fall and sits together as it did for decades at Alnwick. Indeed, more than any volume in particular the collection probably has its greatest value in its whole as an almost fully intact 18th century manuscript library, representing the accumulated learning of an emblematic gentleman scientist. All of the manuscripts in the collection have been given very brief records in our online catalog and are available to researchers now. In addition, however the next year our fantastic cataloging staff will be working through each volume to provide comprehensive descriptions of their contents [Here’s an example of one already completed].

The collection represents Rainsford’s wide reading and collecting interests with manuscripts in French, German, Italian, Latin, English with many snippets in Hebrew. A few of my favorites include a fantastic compilation in Rainsford’s hand while governor at Gibraltar on Judicial Astronomy, a copy of Nicolas Flamel’s supposed 1414 final testament, a treatise on summoning demons with black-and-red illustrated pages, and an Italian work on sexual health.  At least four of the volumes (and likely more) in his library came from the Jesuit College at Naples whose library was seized as part of the suppression of the Jesuits and sold in part in 1780. These manuscripts go beyond the alchemical and occult and include an unpublished chronicle kept by a Jesuit in Naples between 1668 and 1725.

As someone interested in the history of the book and reading I’m thrilled that the collection also includes a pre-printed do-it-yourself commonplace book used by Rainsford to record alchemical calculations and notes. In fact a good number of the works in the collection are commonplace or notebooks of one sort or another into which Rainsford copied tidbits from a variety of print and manuscripts sources, many of which are unidentified.

Finally, the one that got away. At the July sale in London we were able to purchase all but one of Rainsford’s manuscripts from Alnwick castle. One gorgeous volume, full of watercolors was lotted separately and sold on its own to an anonymous phone bidder. An open call to the lucky new owner of this manuscript, we’d be happy at Penn to create a digital facsimile of the manuscript at your convenience so that Rainsford’s library here could be ‘virtually’ complete!

For a recent excellent study of eighteenth-century occultism which cites some of the Rainsford manuscripts (then at Alnwick) see Paul Monod’s Solomon’s Secret Arts: the occult in the Age of Enlightenment (Yale University Press, 2013)

Two earlier inventories of the Rainsford manuscripts from Alnwick exist. One was done as part of the Historical Manuscript Commission’s survey published in 1872. The other was compiled by Adam MacLean in the early 1990s and is available online.

Beyond the British Library there are also additional Rainsford papers and manuscripts at the Wellcome library in London (MSS 4032-4039).

11 responses to “An Occult and Alchemical Library”

Welcome to Unique at Penn, part of the family of University of Pennsylvania Libraries blogs. This space will feature descriptions and contextualization of items from the collections of the University of Pennsylvania Libraries. The site focuses on those materials held by Penn which are in some sense “unique” – drawn from both our special and circulating collections, whether a one-of-a-kind medieval manuscript or a twentieth-century popular novel with generations of student notes penciled inside. See the About page for more on the blog and to contact the editor.