In 2008 the Kislak Center acquired a little pamphlet for its collection on the Dreyfus Affair, one of many works that had belonged to Emile Zola and passed through his family. This pamphlet, concerning Ferdinand Walsin Esterhazy, the true villain in the Dreyfus Affair, was mailed from Strassburg on January 13, 1898. It was simply folded and addressed to “Monsieur Emile Zolo, homme de lettres, Paris” and, after arriving in Paris the following day, was delivered to Zola’s home. In this day and age it’s hard to imagine a similarly addressed mailing arriving at its proper destination.

Yet, just such a thing happened the other day, much to the surprise of Darin Prey-Harbaugh, a Bibliographic Assistant in Serials, who was opening some of the onslaught of mail sent regularly to the Information Processing Center of the Penn Libraries. In the midst of the pile, he came across an envelope addressed “University of PA./Philadelphia, PA,” with the word “Library” written in the bottom left corner of the envelope. The envelope is white and the writer looks to have used a ball point pen, both of which lead one to think it was recently addressed. 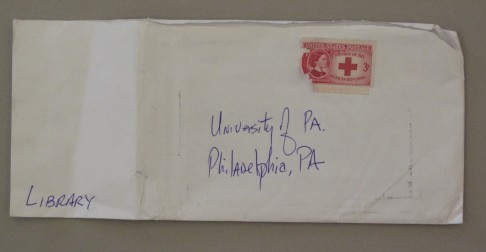 However, even more amazing than the address was the stamp, a three-cent stamp commemorating Clara Barton, founder of the American Red Cross. It has been a long time since first class postage was three cents; it turns out to have been the rate for first class letters up to one ounce between July 6, 1932 and July 31, 1958. The Barton stamp was first issued on September 7, 1948, making it nearly seventy years old. In addition, while the stamp was not cancelled, there is indication of some intervention by the United States Postal Service (USPS), in the form of a fluorescent orange bar code added by the Facer-Canceller machine that processes letters, making this mailing even more of a mystery. 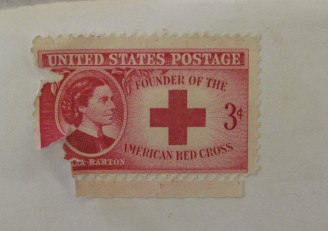 When Darin opened the letter, he found a small volume inside. It looked old, really old, so he decided to visit his colleagues in the Kislak Center and see if they were interested in this little volume.

From the binding and the markings, it had clearly belonged to the Penn Libraries, containing its accession number and its Dewey call number, though it would appear to have gone missing decades ago.

This little volume, consisting of four leaves or eight pages, is titled Disz Lied Sagt von Lucretia and is by Ludwig Binder, who wrote a number of songs about ancient heroes and tyrants that were popular at the time. It has a lovely little woodcut on its title page, showing men eating at a table.

There are no recorded copies of this edition in WorldCat, though there is a brief bibliographic record for what appears to be the same work. Liz Broadwell, who just cataloged this work, notes that there is supposedly one other copy, according to the GVK (Gemeinsamer Verbundkatalog or Union Catalog of libraries in Germany and Austria), and it is in the Rostock University Library. The Penn copy is thus an incredibly rare survival, not surprising given its size. END_OF_DOCUMENT_TOKEN_TO_BE_REPLACED

The Diary of Ray Evans, 1939-1945, has been digitized and transcribed, and is presented in the form of an online flip book.

The papers of Hollywood lyricist and University of Pennsylvania alumnus Ray Evans (Wharton class of 1936) were donated to the Kislak Center for Special Collections, Rare Books and Manuscripts in 2011 by the Ray and Wyn Ritchie Evans Foundation. Among the treasures in the collection is the songster’s diary, kept during the war years of 1939-1945. Written in pen on looseleaf notebook paper and bound by a small three ring binder, it may have been one of several diaries kept by Evans, but today it is the only one that survives.

Ray Evans is best known for producing with his songwriting partner Jay Livingston (Penn class of 1937) hit songs such as “Mona Lisa” (famously sung by Nat King Cole), “Que Sera Sera” (Doris Day), and the holiday favorite “Silver Bells” (made famous by Bing Crosby). These tunes were featured in movies of their day, winning Academy Awards for “Mona Lisa” and “Que Sera Sera” as well as their earlier song “Buttons and Bows.” How Ray Evans got to this point may be traced back to his years as a struggling songwriter, first in New York and then in Hollywood.

Documents from the Ray Evans papers, such as the sheet music for the Livingston and Evans song “Shadows of Midnight Blue” are linked at appropriate places within the online diary.

As a means to encourage exploration of these formative years, Evans’ lyrics and music in general, and his collection of personal and professional papers here at Penn we have transcribed and digitized the diary, presenting it as an online flip book. Images of the diary pages and a transcription for easier reading are presented side by side. And supplemental material from the papers has been scanned and linked to the diary pages for further exploration.

Simply trying to make ends meet, the young Ray Evans is often conflicted about his future. Should he continue to pursue a dream of “making it” in show business or should he buckle down and put his college degree in business to work? For a time, neither course seems to offer much hope, and Ray is revealed through the early pages of the diary to be dejected and feeling blue. Ray also has poor luck with women and his friendship and working relationship with Jay Livingston is often strained.

In the online flip book, names and places link to entries in Wikipedia. Online audio and sheet music of Evans’ songs are linked when available too.

The song-writing team put forth a good bit of energy to make connections in the New York music scene. In the fall of 1939 they met the producers Ole Olsen and Chic Johnson, who starred in their own Broadway review, Hellzapoppin’, at the Winter Garden Theater. Jay and Ray auditioned for the pair and eventually received several commissions for songs that appeared in the show and in other productions. One of their first commercial successes was the song “G’Bye Now,” which made the Hit Parade in 1941. END_OF_DOCUMENT_TOKEN_TO_BE_REPLACED

The start of a new month (rainy and cold here in Philadelphia) has reminded me to write about a new almanac fragment here at Penn. In November of last year, the Penn Libraries purchased a unique and somewhat mysterious eighteenth century manuscript. Consisting of a single bifolium (a sheet folded to make four pages) it was likely produced in Philadelphia (or somewhere else of a similar latitude) in 1746/7. It appears to be part of an almanac containing eclipse charts, predictions for weather, and astrological signs, removed from what must once have been a larger manuscript volume. Astronomical and almanac manuscripts from colonial Philadelphia are not common though there was a robust trade in print almanacs and lunar charts throughout the city in the period with at least four different almanacs each year by mid-century [1].

What initially drew my attention to the manuscript was its attribution to David Rittenhouse, the famous Philadelphia astronomer, inventor, and treasurer of the Continental Congress. His masterful 1771 Orrery is today here in the University of Pennsylvania Libraries. To be clear, the attribution of this manuscript to Rittenhouse is decidedly uncertain. There is a small pencil annotation of unknown date on the side of the bifolium listing him as the author.

Arguing against the attribution is the fact that the manuscript contains the lunar tables and almanac for 1747 indicating likely creation in 1746 when Rittenhouse would have been only 14 or 15 years old. The only substantial collection of Rittenhouse astronomical manuscripts is at the American Philosophical Society which holds three of his notebooks from the last quarter of the century. A look at the handwriting in these neither convinced me nor completely dissuaded me from the attribution. That Rittenhouse could have composed or copied a set of lunar tables and almanac as a teenager is not necessarily as far-fetched as it seems. Later reports of his early years noted that at the age of 14 many of the fences and plows with which he worked were covered with notations and mathematical formulas, by the age of 17 he had even constructed a fully functional clock by himself [2].

Another, somewhat more likely possibility is that the manuscript is a copy or partial copy of a printed almanac circulating in the period. The chart for the month of January, for instance, is very reminiscent of the print almanacs of the time – beginning with an aphorism or epitaph followed by a series of predictions and notes about the days of the month. Given this,  I think it likely that at least part of the text was copied by a young Rittenhouse (or someone else) from a printed almanac.

There were at least four or five different almanacs printed each year in Philadelphia with more in New York and Boston. What’s interesting and remarkable is that the text in the manuscript does not match any of these surviving American almanacs for 1747 that I have been able to locate. Of the almanacs likely to have printed in Philadelphia for that year, only one has failed to survive in any copies, the Franklin-published 1747 American Country Almanac which has never been traced [3]. From the description of the New York issue of the American Country Almanac for that year which survives in one copy at the Huntington, it seems unlikely that this is a copy of that particular text [4]. 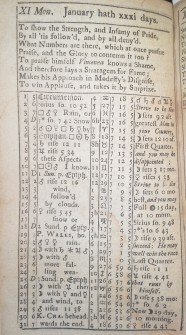 January, from the Philadelphia issue of the American Country Almanac for 1748. HSP copy (Evans Digital)

January, from the Philadelphia Pocket Almanac for 1747. Printed by Franklin. UPenn Curtis 161.

One of the pleasures of working in libraries is acquiring manuscripts like this one, about which much remains unknown. I hope that this post generates interest in the manuscript and inspires a student or researcher to take a closer look and delve into its origins and what it might be able to tell us about astronomical commonplacing and almanac creation in colonial America.

[3]
In his survey of Franklin’s printing, Benjamin Franklin’s Philadelphia printing, 1728-1766 (Philadelphia, 1974) [no. 392] Clarence Miller lists this as possible but doubtful based on the fact that though Franklin-issued copies of the American Country Almanac survive for 1746 and 1748, he did not advertise one for 1747 and the New York copy at the Huntington does not have Franklin’s tell-tale anatomical woodcut.

[4]
With many thanks to Vanessa Wilkie and Steve Tabor at the Huntington for their help with this.