Earlier this year, the Penn Libraries began accessioning the collection of the late Reverend Shojo Honda (1929-2015), generously donated to the University of Pennsylvania by his son Tamon Honda. Rev. Honda’s collection is a mix of Japanese and English publications focusing largely on Shin Buddhism, but it also covers topics as diverse as Sanskrit language study, Japanese flower arrangement (ikebana), the works of author Shiba Ryōtarō, and local histories of Takatsuki, Osaka—the city in which Rev. Honda spent part of his youth. Many of these books are owned by no other library in the world. Some, like his mimeographed adaptations of short stories by Akutagawa Ryūnosuke and Ogawa Mimei, are not just unique bibliographic treasures, but also a direct window into Rev. Honda’s life and interests. And some of the items from the Reverend’s library were utterly unanticipated. 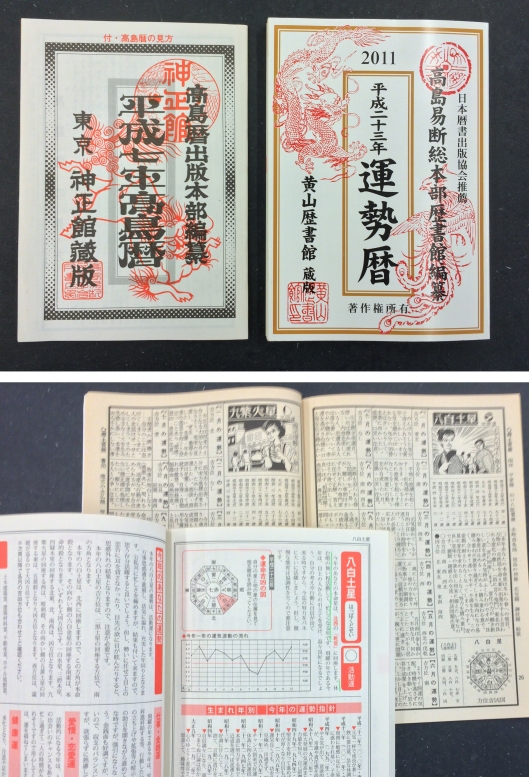 Among these are two fortune-telling almanacs (koyomi 暦), dating from 1995 and 2011 respectively. These almanacs are filled with precise and elaborate octagonal diagrams outlining the lucky and unlucky directions of the compass rose according to one’s “Nine Star Ki” profile—something like a zodiac sign determined by the year of one’s birth—and daily calendars listing the luck predictions for those zodiac signs. The earlier work Heisei 7-nen Takashima-reki 平成七高島暦 [“1995 Takashima almanac”] has a quasi-religious copyright holder (or zōhan 蔵版) declared on the cover: Shinseikan 神正館, perhaps anglicizable as “The Hall of Divine Righteousness”. The latter Heisei 23-nen unseireki 平成二十三年運勢暦, or 2011 Calendar of Good Fortune, on first glance appears to be the work of a more academic institution, Kōzan Rekishokan 黄山歴書館, or the “Huangshan Historical Library”. The names of their editorial bodies are also similar, invoking the family name Takashima. Despite their visual similarity, the economic forces behind the books appear vastly different. The 1995 Takashima-reki is a 32-page book that looks more like a giveaway than anything else; the 2011 Unseireki is an unmistakably commercial publication with a product code and a price of ¥100 published by Daiso, a well-known chain of 100-yen shops.

As with our recent collection of Japanese cruise books, we knew there was a hidden history here, and we immediately set out to acquire more exemplars of these fortune-telling almanacs: 33 in total. Curiously, none of these were published for years earlier than 1946, the first calendar year after Imperial Japan’s surrender to the Allies of World War II. But the history of almanacs in Japan dates back centuries (if not quite millennia).

Along with the increasing spread of print culture in the Edo period (1600-1868), so grew the means to publish calendars of practical information like the months and tides, and of less practical information like which days were lucky for what events. Writing about the illustrated ukiyoe almanacs (egoyomi 絵暦) of the Edo period in a 1929 issue of the Apollo, William H. Edmunds provides the following eurocentric takedown of their content:

[…] how little importance was time in the olden days of Japan. Second or minutes were unknown, […] days pass, but there were no weeks, and the months were just moons, numbered and named after the zodiacal signs, or by fanciful names indicative of a seasonal or festive observance […]. Years were not counted in continuous sequence, but according to certain nengō, or year names, appointed by the Emperors arbitrarily, sometimes to commemorate an auspicious occasion or to ward off some malign influence; hence none could answer off-hand the number of years that had intervened between one period and another.

Assuming the purpose of almanacs is simply to provide the mathematical precision required to calculate dates, then Edmunds is correct in his assessment. But the “fanciful names” and “seasonal observances” are essential to Japanese calendars and their various overlapping customs and superstitions. In a far less judgmental tone, Edmunds notes that official almanacs (honreki 本暦) were published in Ise, the seat of one of Japan’s most important Shinto shrines. Outside of the Ise region, specially licensed printers allowed to produce and distribute these products throughout the country. These honreki, however, did not suit everyone’s purposes. For one, they required a level of literacy not widespread. Secondly, they didn’t include information necessary for certain types of divination necessary for folk customs.

Thus underground presses secretly publishing obakegoyomi お化け暦, or “ghost almanacs” also operated. Some of these ghost almanacs were purely visual for the illiterate, like egoyomi featuring illustrations by the likes of artist Suzuki Harunobu 鈴木春信 (1725?-1770). While Harunobu seems to taken advantage of a period in which publishers of ghost almanacs were tolerated, by the early years of the Meiji period (the mid-1870s), the Japanese government had renewed their commitment to a standardized almanac, this time based on the solar calendar. In eliminating the lunar calendar upon which so much of farm policy and folk custom relied, the Meiji government’s monopoly on calendar production once again invoked the specter of ghost almanacs. Titles like Nōka benran 農家便覧 [“The Farmer’s Handbook”] (1894) bundled in Nine Star Ki and lucky day divination. Publishers like Fukunaga Kahē 福永嘉兵衛—a name as fictitious as it is auspicious—began haunting the world of underground publishing.[1] 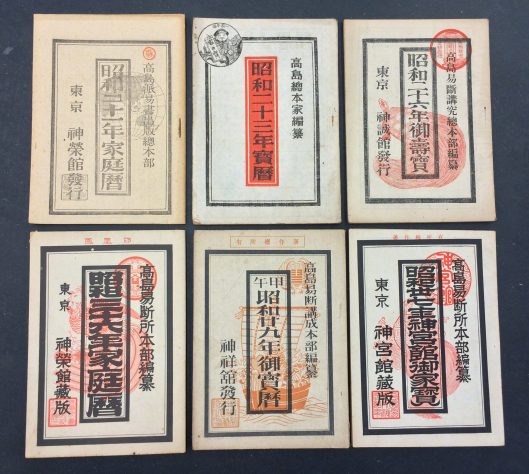 The official adoption of the solar calendar was just one of many steps Japan took to place itself on equal footing with the industrializing West. But modernization didn’t reject the custom and superstition wholesale. In fact, some profited immensely from it. Enter Takashima Kaemon 高島嘉右衛門 (1832-1914), an entrepreneur who would effectively become a patron saint of fortune-telling. Takashima’s lifetime interest in fortune-telling was centered largely around the I Ching, or Book of Changes, and the interpretation of its 64 hexagrams. Takashima profited from his successful predictions, investing heavily in timber before the great earthquake of Ansei 2 [1855]. His fortunes didn’t last long, as heavy debts and his attempts to overcome them through illegal dealings with foreigners landed Takashima in prison for seven years. During his imprisonment, he redoubled his commitment to studying the I Ching. After his release from prison, Takashima’s fortunes once again grew, and he found himself financially supporting the ambitions of men in high places like Itō Hirobumi, a statesman who would go on to become Prime Minister.

Financial support wasn’t Takashima’s only goal. In Meiji 19 [1886] he had self-published a ten-volume edition of his own interpretation on the I Ching called Takashima ekidan 高島易断 [“Takashima’s Judgements on the Book of Changes”]. Several revised editions followed. An English translation, The Takashima ekidan, was published in 1893. The book was clearly a hit, and people of influence sought advice from Japan’s preeminent fortune-teller, who divined everything from cholera outbreaks to colonial upheaval through I Ching cleromancy. In his dual position as industrialist and soothsayer, Takashima never profited directly by selling his fortunes as a trade. His name has become associated with the playful aphorism Uranai wa uranai 占いは売らない: “Fortune-telling is not for sale”.