Penn Libraries host a number of blogs including that of the fantastic Weigle Information Commons. Yesterday, Heather Glaser, Assistant Fine Arts Librarian, posted a fascinating piece about Andy Warhol’s 1965 visit to his exhibition at the Institute of Contemporary Art at Penn, then located in the Fisher fine arts library. Mobbed by students and other fans, Fire Marshals had to cut through a wall in order to get him out of the building. A 1965 photo (left) of Warhol surrounded by students caught my eye and I thought the post might interest Unique at Penn readers. For more on Warhol’s visit as well as additional photos of the event from the libraries’ collections see Rachel Pastan’s “Checklist for the Prince of Pop” at the ICA Miranda blog.

[Ed. Note: Happy New Year! Our first post of 2013 is from Dianne Mitchell, a Ph.D. student in the English Department at Penn]

Today, we’re going on a field trip.  It’s a trip that will take us beyond the hallowed walls of Van Pelt Library and into the nation’s first hospital: the Pennsylvania Hospital, founded by Ben Franklin and Dr. Thomas Bond in 1751.[1]  More specifically, we will be going to the Clinical Library of the hospital, a trip which involves a Hogwartsian journey up three flights of stairs to the Old Pine Building and then down another flight to the office of the Clinical Librarian.  Once arrived, we will be confronted with a mysterious item: R710 Ar5 a two-volume collection of twenty printed texts that can only be described with the qualifier “mostly”: mostly printed in London in the 1730s and 40s, mostly medical in character.

How this nonce collection – a book made unique by its particular selection and compilation of various published materials – ended up in Philadelphia in the library of the Pennsylvania Hospital is still something of a mystery.  The library’s catalogues reveal that the two volumes, along with two further volumes which couldn’t be located at the time of writing, were acquired by the library sometime between 1794 and 1806. The individual items in the volumes could have been compiled and bound by a librarian, but a glance through the minutes of the board of the Pennsylvania Hospital shows that large-scale efforts were being made to expand the library during this period; it seems likely that the nonce collection existed in private hands prior to its acquisition, and can be classed with other untitled volumes described in the minutes as being purchased at an estate sale, or willed to the hospital by a well-off local with a library.[2]

Pastedown and flyleaf of R710 Ar5 v.1 with manuscript table of contents.

What make the two volumes of this collection truly fascinating, however, are the hodge-podge of materials they contain.  We can begin to get a sense of this from the handwritten tables of contents in each volume , which include such titles as “Armstrong’s Art of Health a Poem” (the 1745 second edition of physician and poet John Armstrong’s The Art of Preserving Health: A Poem. In Four Books, printed for A. Millar [ESTC T22477]), and “Denoue’s Cat. of several curious of Human Anatomy in Wax” (A Catalogue Of Several Curious Figures of Human Anatomy in Wax, Taken from the Life [ESTC T149019] which accompanied an exhibition on view in London).

But to really understand the diversity of genres and subject matters contained within this strange collection, we need to turn to a few of the texts themselves.

The End of the Earl

Six items between the two volumes are connected with the man who would go down in history as England’s first prime minister: Robert Walpole, first Earl of Orford (1676-1745).[3]  While there is not any clear principle for the ordering of the texts within the two volumes (neither genre nor chronology govern the order, and pamphlet responses often precede the texts that prompted them), the compiler of the collection clearly wanted to create a subsection of the two volumes that brings together texts dealing, not with the life of the Earl of Orford, but with his death.

The first of these is John Ranby’s A Narrative of the Last Illness of the Right Honourable Earl of Orford (1745) [ESTC T28449]. Ranby (1703-1773), sergeant-surgeon to King George II,[4] attended the Earl in his final weeks, and claims at the opening of the narrative that his patient wished his sufferings to be made public (presumably) for the benefit of scientific knowledge.  The result reads, at least to someone who spends more time with self-consciously literary texts, like a parody of an epistolary novel:  we find Ranby supplementing his narrative with diary entries, a transcribed autopsy report, a copy of a letter from the Earl’s country physician to his physicians in town, and even an engraving of the Earl’s kidney stones, “the stone” being an ailment which recurs in various texts throughout the collection and which can be said to have contributed to the Earl’s death even if it was not the immediate cause. 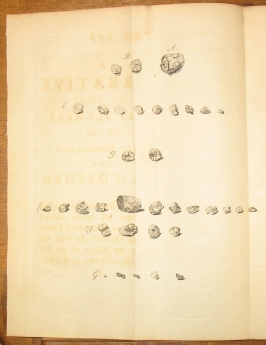 What kind of responses did this intimate narrative, which dwells unflinchingly on the Earl’s tendency to urinate blood and his desire to be treated, like many of his time, with a seemingly endless series of “clysters” (enemas), generate?  In this collection, Ranby’s Narrative is followed by two anonymous and disgruntled publications, one titled An Epistle to John Ranby [ESTC T32848] and the other Advice to John Ranby [ESTC T21059].  The author of the first objects in no uncertain terms to what he reads as insinuations by Ranby that the Earl’s death could have been avoided if he had not taken advice and medicine from other surgeons present throughout his illness: “an unwary Reader,” he complains, “would be apt to conclude, that the bloody Urine my Lord so frequently made, after Dr. Jurin had visited him, was altogether occasioned by this Lixivious Medicine” (24).  Interestingly, the author of the second publication is less interested in defending a particular surgeon than in showing, via a kind of textual exegesis, that Ranby’s language throughout the Narrative is inherently impartial, despite the surgeon’s claims to the contrary.  He also reads Ranby’s detailed discussion of the Earl’s symptoms as an invitation to diagnose the Earl himself (the solution, he claims, would have been easy had the surgeons remembered a lengthy passage in Greek which he helpfully includes in his Advice).  These attacks prompted a cranky rebuttal by Ranby which forms the last item in the sequence of six “Orford” texts, the pithily titled An Appendix to the Narrative of the Last Illness of the Right Honourable the Earl of Orford [ESTC N30315].