[Editor’s note: Today’s post is by David Murrell, a rising junior at Penn studying History and Political Science. Fascinated by all things French, he has spent this summer interning at the Kislak Center and happily sifting through piles of Dreyfus Affair postcards]

At first glance, postcards don’t appear to be particularly unique. Mass produced and intended for broad public consumption, they’re certainly not as rare as, say, the handwritten almanac that was recently featured on Unique at Penn. But that’s not to say that postcards shouldn’t be examined just as carefully. Indeed, with their unique handwritten messages and variety of printed designs, postcards provide a fascinating glimpse into the world from which they were sent.

The Dreyfus Affair (which began with the French captain Alfred Dreyfus’ false conviction for treason in 1894 for sending military secrets to the Germans) corresponded with a dramatic rise of the postcard in popular culture.  First invented in the late 1860s, by the time of the Dreyfus Affair postcards were both an exciting and novel method of communication for the masses. The Dreyfus Affair only reinforced the postcard’s popularity, as it led to the production of thousands of different political cards documenting the twists and turns of the Affair. By 1906, the year Dreyfus was finally exonerated by the French military, postcards were ubiquitous. In Great Britain alone, over 2 billion postcards were purchased that year — in other words, given Britain’s population of 40 million, every British citizen purchased an average of 50 postcards in just one year [1].

The Dreyfus Affair may have actually reinforced the postcard’s popularity: thousands of different political cards documenting the twists and turns of the Affair were printed in France and other countries. Indeed, one observer at the time of the Affair estimated that over a period of 18 months, more than six million Dreyfus Affair postcards were printed [2]. The Kislak Center holds a large collection of over 200 Dreyfus postcards in the Lorraine Beitler Collection of the Dreyfus Affair.

But how many of these postcards were actually used—written on and mailed? We can group the collection’s postcards into four main categories:

For this post, I’d like to focus on this final category. In the Beitler Collection there is a series of pro-Dreyfus postcards, sent to and from Brussels in 1900, that provides a brief history of the Affair from the perspective of a Dreyfus sympathizer. While we normally think of the postcard as a unitary item that can stand alone on its own, these cards were printed in a series, as were a number of other sets of cards during the Affair. In addition, the owner and writer of this set spread his or her message across the multiple cards in the set. Each card is thus a piece of a larger puzzle, each one contributing to the overall message. What I present here is a fascinating—and certainly atypical—case where we can follow a Dreyfus supporter, acquiring a series of pro-Dreyfus postcards and then writing a pro-Dreyfus message on them, and mailing the group to someone with similar sympathies.

Even if we momentarily ignore the postcards’ written text, it is clear from their printed drawings that they are the work of Dreyfus supporter. For example, in the first postcard, we see an image of the novelist Émile Zola, an ardent Dreyfus supporter, spraying figurative  “justice” on a crowd of anti-Dreyfusards. The crowd’s anti-Dreyfus beliefs are revealed by the men’s hats, which have on them the names of France’s most virulent anti-Semitic newspapers, including Édouard Drumont’s famously vile “La Libre Parole.”

Similarly, in the fourth postcard, the French press is depicted as an old woman, a kind of monster that barely resembles a human. The figure is attempting to keep the lid on a coffin labeled “Dreyfus Affair” in order to prevent Dreyfus, whose hands are shown holding two pieces of paper labeled “humanity” and “justice,” from escaping his coffin. The powerful image inspires sympathy for Dreyfus, while also vilifying the media for its attempts to suppress the truth. 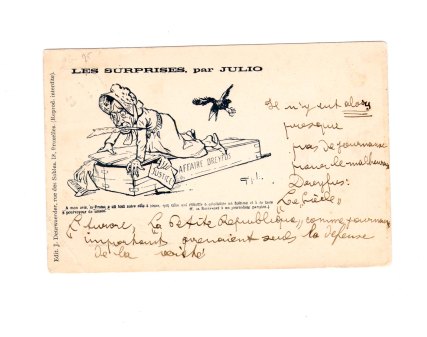 Finally, the fifth card, captioned “Close the boxes, damn it!” depicts a French soldier scrambling to literally keep the lid on the various scandals that troubled the military during the Dreyfus Affair, ranging from General Picquart’s wrongful forgery conviction, to Zola’s libel trial, to Dreyfus’ multiple sham trials. All of these events and their backstories were linked to Dreyfus and threatened the military’s cover-up. It is interesting to note that despite this drawing’s bitter and critical tone, there remains a slight glimmer of hope — indeed, there are so many boxes in the picture that it would seem impossible for them to all be covered up by one soldier. This postcard would in fact prove to be quite prescient — though it was only sent in 1900, by 1906 the army could no longer cover up Dreyfus’ innocence, and he was finally exonerated.