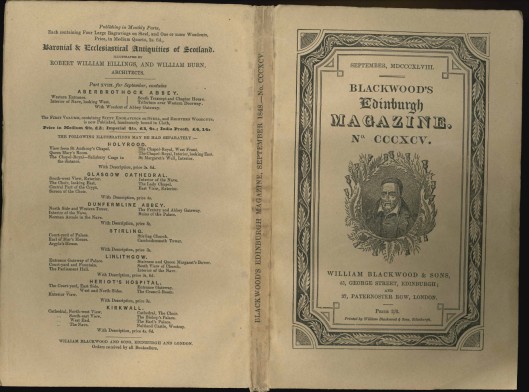 What is it that you read when you read a print copy of a magazine in a library or as a digital photograph from an online source? Though plenty of strange things happen to monographs, bindings are removed, plates sometimes missing or not scanned, fold-outs mangled, periodicals are particularly fluid material texts, often intended to be preserved in different formats than they were sold right from the start – think of those shelves of bound journals sitting in the stacks of university libraries, or even your old copy of the New Yorker missing all those annoying subscription cards.

With the advent of mass digitization projects like Google Books, the Internet Archive, and Hathi Trust, long runs of periodicals before 1923 totaling millions of pages have been made readily available to the wider world. This is especially important for those who work on nineteenth century literary culture – which, particularly in the United States and Great Britain, depended heavily on the periodical press. Many of the great books and authors of the period appeared first in magazines and journals. The various literary and political periodicals of the day had large subscription bases, sometimes publishing dual editions on both sides of the Atlantic. Blackwood’s Edinburgh Magazine was one of these heavyweights. Published between 1817 and 1905 (and in another form until 1980) in Edinburgh, London, and New York the magazine featured nearly all the great authors of the day including George Eliot whose Middlemarch first appeared in eight issues of the journal [1].

Long runs of Blackwood’s Edinburgh Magazine can be found in most British and American research libraries and as such there is also a proliferation of digital copies online – 5 separate copies of each volume of the British edition and 3 of the American at my last count [2]. Yet, none of these online copies nor likely most of the physical copies found in libraries exist in their original form

The shelves of Blackwood’s at Penn above are pretty typical. Each issue from a particular intellectual “volume” (e.g. volume 48) of the magazine has been bound up with other issues to form a physical volume. The volumes themselves are bound for ready browsing and reading in typical period style and it’s clear that many readers of the day had their own copies bound as soon as the volume was completed. Below for example you can see the final page of text for the August 1848 issue of volume 48 of Blackwood’s on the left with the text for the September 1848 issue beginning immediately on the facing page. 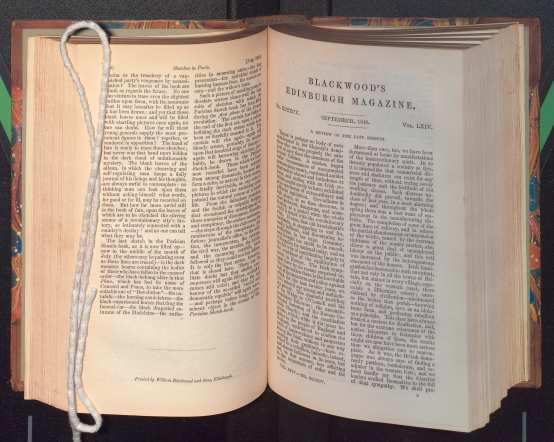 Digital images of the UC-Berkeley,Penn State University, and University of Iowa copies of Blackwood’s for September 1848.

This view of the magazine, with one month quickly transitioning to the next, in both print and digital form, represents only one view of the text. The form in which they arrived to readers in the post or at the local bookseller looked quite a bit different. Recently we acquired here a set of six issues of Blackwood’s Magazine which have survived in their original state [3]. Bound in paper wrappers individually labeled with the month of issue and bearing advertisements on the back, these issues also retain a cache of advertising and other ephemeral material excised from all other copies I’ve seen. 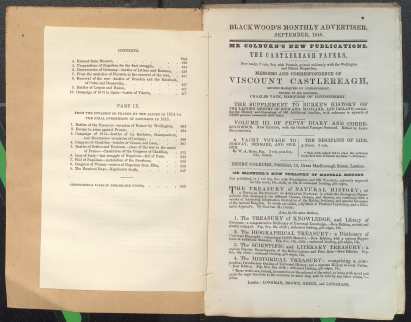 Above for example is what a reader would have seen upon opening the front wrapper for the September 1848 issue. Loosely stitched into the advertising section is a specimen of a forthcoming publication from the William Blackwood publishing house. This insert consists of twelve pages including an advertising pitch from the author dated August 7, 1848, a table of contents, and a single gathering printed from the plates for the book itself [4]. END_OF_DOCUMENT_TOKEN_TO_BE_REPLACED